Here are the images you need for the hero’s attributes linked to Healing of the Paralytic (Luke 5:17-26)

The images are displayed small here, click on the image you wish to have, then save the image that loads.

This is the house to go with the paralytic’s story, it is little tricky to fold. Those under 10 will have trouble and may choose to cut out the steps rather than folding them. However, once you get the hang of it you can make them very, very quickly. The sign is supposed to say ‘Who can I bring to Jesus’ – the PDF is blank so you can enter the message in the language of your choice.

END_OF_DOCUMENT_TOKEN_TO_BE_REPLACED

Dancing men are designed for very young, preschool, children but can be used as a craft with slightly older children as practice of independent work, as they are so simple to complete. 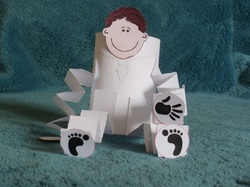 I took the face image and the hand images from Clker.com and so they have no copy write on them. The pdf page will give you four men. Each child also needs 2/3 of a sheet of paper or thin card for the body and limbs.

END_OF_DOCUMENT_TOKEN_TO_BE_REPLACED

This is a re-write of the healing of the paralytic story, the none-translated version we used.
(Please note we have mostly younger children and the story reflects that, also note that we make the man dance at the end to tie in with the craft a little more, it’s not biblical, but artistic licence in the spirit of the passage)

A grumpy man lay on his mat outside in the street. It was hot and he was irritated because he knew Jesus had come to his town but he wouldn’t get to see him. He knew this because he couldn’t walk, he couldn’t move at all, he was paralysed. To make things worse he had to listen to all the people as they ran down the street talking about this man Jesus. “He is the most amazing teacher I’ve ever heard” one man said, “He can perform miracles” said another, “ he’s healed so many people” said yet another man as he too ran past. And so the man lay on his mat getting hotter and more irritated until as last he saw a familiar face, four familiar faces. “What are you doing here?” he asked “didn’t you want to hear Jesus?”, “Oh yes” they replied, “but when we got there we realised that you should meet him too” and they slipped long ropes under his man and carried him to the house.
The man was so happy his friends had arrived, but when they got to the house, where Jesus was, they couldn’t get in. There were people everywhere, at every window and every door. The man became grumpy again, they were just too late. But, his friends wouldn’t give up. They climbed up to the top of the house and started to make a hole in the roof.

END_OF_DOCUMENT_TOKEN_TO_BE_REPLACED

For many young children the notion of not being able to move, to be a paralytic, may be one they have never really considered. The games then reflect this thinking. The activity we chose to use is marked with a *

Obstacle course this is simple if the area is big and the resources many, you can make it an individual or a team activity dependant on the numbers of children. Make sure the objective is clearly stated and having a winner does not build a group as much as helping everyone to achieve the goal of completion.

Restriction* taking scarves, ribbons or other suitable lengths of fabric or cord tie limbs of players together. Place a soft object such as a bear on one side on a chair at one side of the room and specify its destination on the other side of the room. Remember that the combination of which limbs and if they are tied behind or at the front of a child can make this game hazardous but challenging for any age group. note: you don’t need much space to do this activity.