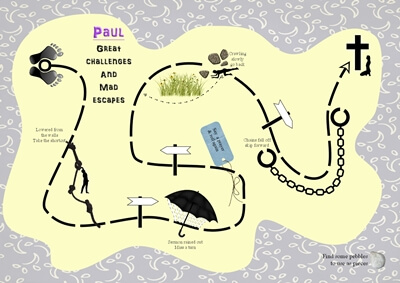 Sometimes the fun can seem to lie in the games and the craft and not really in learning about the story. So, I thought I’d introduce a game that can be used to directly prompt questions about the 3 escapes in the story.

This is a simple game where you need a die per board and a pebble per child. (I use pebbles as they can be a prompt for Paul being stoned)

The game can be downloaded by clicking on the image. It’s designed on A3 / A4 paper.

One response to “Early Life of Paul – Escapes | Worksheet”