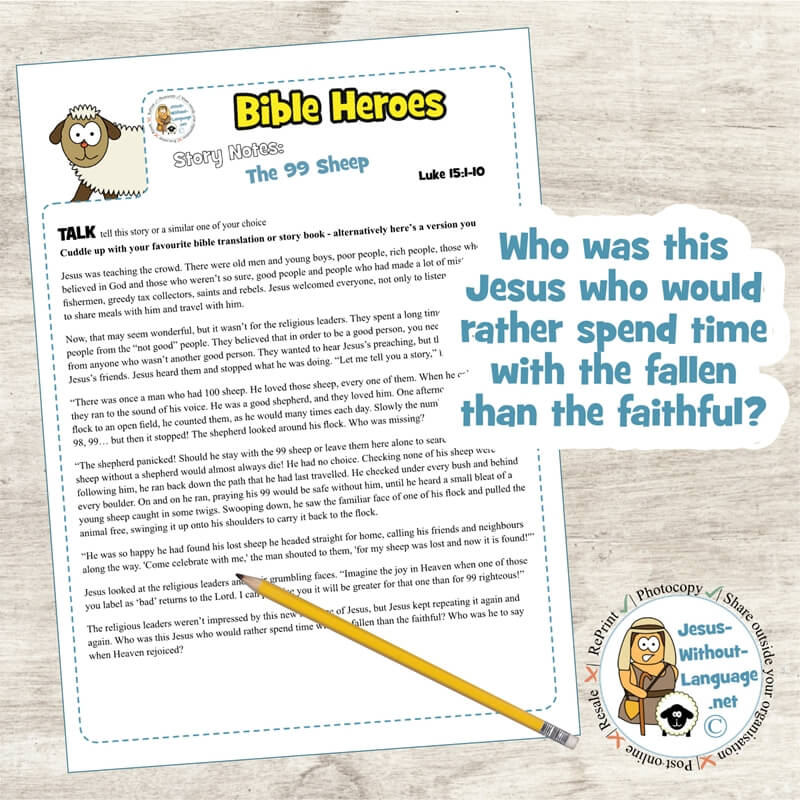 Essential Teachers notes:
This parable, often called the Lost sheep, is one that’s hugely quoted an a staple of Christian symbolism. It’s a fabulous passage because it shows us not only that Jesus will rescue us no matter how far we have wandered but that Jesus recognised the religious leaders faith in that he knew they did not need his help in the same way the fallen did.

Jesus was teaching the crowd. There were old men and young boys, poor people, rich people, those who believed in God and those who weren’t so sure, good people and people who had made a lot of mistakes, smelly fishermen, greedy tax collectors, saints and rebels. Jesus welcomed everyone, not only to listen but to join him, to share meals with him and travel with him.

Now, that may seem wonderful, but it wasn’t for the religious leaders. They spent a long time sorting the “good” people from the “not good” people. They believed that in order to be a good person, you needed to stay away from anyone who wasn’t another good person. They wanted to hear Jesus’s preaching, but they grumbled about Jesus’s friends. Jesus heard them and stopped what he was doing. “Let me tell you a story,” he said.

“There was once a man who had 100 sheep. He loved those sheep, every one of them. When he called to them, they ran to the sound of his voice. He was a good shepherd, and they loved him. One afternoon, after leading his flock to an open field, he counted them, as he would many times each day. Slowly the number rose: 76, 84, 92, 98, 99… but then it stopped! The shepherd looked around his flock. Who was missing?

“The shepherd panicked! Should he stay with the 99 sheep or leave them here alone to search for the lost one? A sheep without a shepherd would almost always die! He had no choice. Checking none of his sheep were following him, he ran back down the path that he had last travelled. He checked under every bush and behind every boulder. On and on he ran, praying his 99 would be safe without him, until he heard a small bleat of a young sheep caught in some twigs. Swooping down, he saw the familiar face of one of his flock and pulled the animal free, swinging it up onto his shoulders to carry it back to the flock.

“He was so happy he had found his lost sheep he headed straight for home, calling his friends and neighbours along the way. ‘Come celebrate with me,’ the man shouted to them, ‘for my sheep was lost and now it is found!’”

Jesus looked at the religious leaders and their grumbling faces. “Imagine the joy in Heaven when one of those you label as ‘bad’ returns to the Lord. I can promise you it will be greater for that one than for 99 righteous!”

The religious leaders weren’t impressed by this new message of Jesus, but Jesus kept repeating it again and again. Who was this Jesus who would rather spend time with the fallen than the faithful? Who was he to say when Heaven rejoiced? 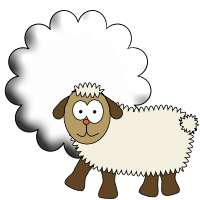 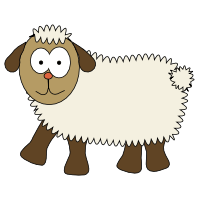 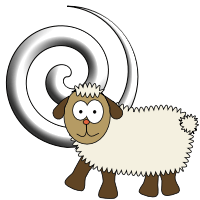