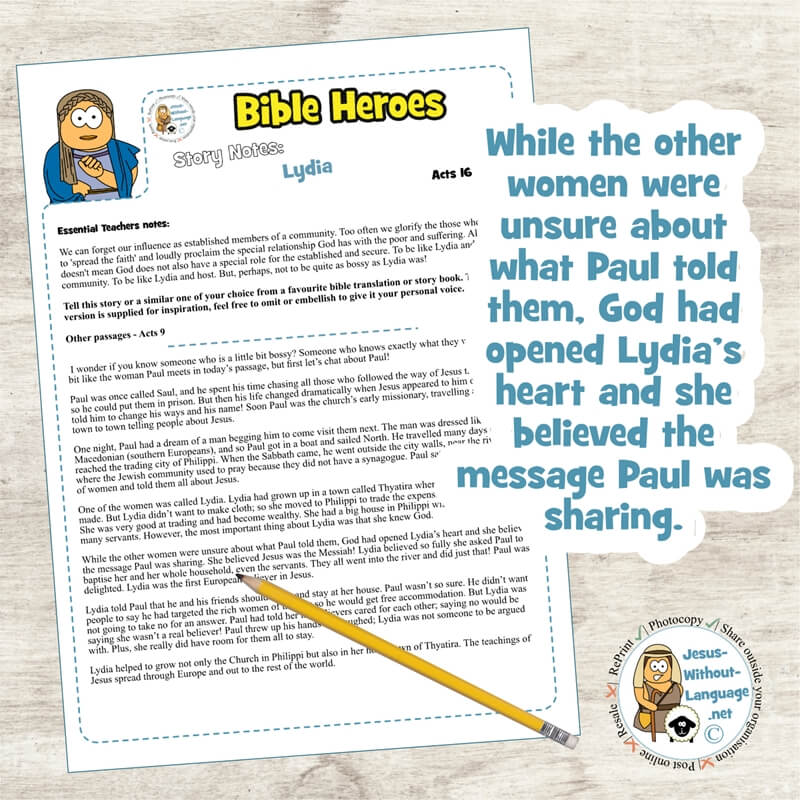 Essential Teachers notes:
We can forget our influence as established members of a community. Too often we glorify the those who travel to ‘spread the faith’ and loudly proclaim the special relationship God has with the poor and suffering. All that doesn’t mean God does not also have a special role for the established and secure. To be like Lydia and change a community. To be like Lydia and host. But, perhaps, not to be quite as bossy as Lydia was!

I wonder if you know someone who is a little bit bossy? Someone who knows exactly what they want? That’s a bit like the woman Paul meets in today’s passage, but first let’s chat about Paul!

Paul was once called Saul, and he spent his time chasing all those who followed the way of Jesus the Messiah so he could put them in prison. But then his life changed dramatically when Jesus appeared to him on a road and told him to change his ways and his name! Soon Paul was the church’s early missionary, travelling around from town to town telling people about Jesus.

One night, Paul had a dream of a man begging him to come visit them next. The man was dressed like a Macedonian (southern Europeans), and so Paul got in a boat and sailed North. He travelled many days until he reached the trading city of Philippi. When the Sabbath came, he went outside the city walls, near the river, where the Jewish community used to pray because they did not have a synagogue. Paul sat down with a group of women and told them all about Jesus.

One of the women was called Lydia. Lydia had grown up in a town called Thyatira where purple cloth was made. But Lydia didn’t want to make cloth; so she moved to Philippi to trade the expensive purple cloth there. She was very good at trading and had become wealthy. She had a big house in Philippi with many rooms and many servants. However, the most important thing about Lydia was that she knew God.

While the other women were unsure about what Paul told them, God had opened Lydia’s heart and she believed the message Paul was sharing. She believed Jesus was the Messiah! Lydia believed so fully she asked Paul to baptise her and her whole household, even the servants. They all went into the river and did just that! Paul was delighted. Lydia was the first European believer in Jesus.

Lydia told Paul that he and his friends should come and stay at her house. Paul wasn’t so sure. He didn’t want people to say he had targeted the rich women of the city so he would get free accommodation. But Lydia was not going to take no for an answer. Paul had told her the believers cared for each other; saying no would be saying she wasn’t a real believer! Paul threw up his hands and laughed; Lydia was not someone to be argued with. Plus, she really did have room for them all to stay.

Lydia helped to grow not only the Church in Philippi but also in her home town of Thyatira. The teachings of Jesus spread through Europe and out to the rest of the world.

Other posts for Lydia. 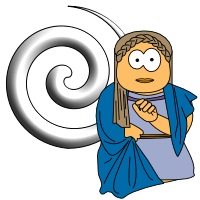 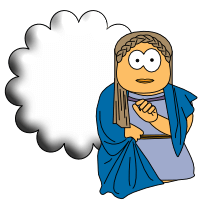 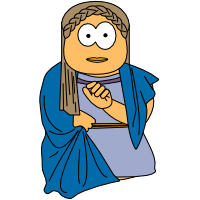