Today’s hero is Abijah’s donkey, he shows us the gift of a bigger story.

Essential Teachers notes:
This story heavily uses artistic licence to tell the story of Palm Sunday and the triumphant entry into Jerusalem. While Abijah’s name is biblical it is artistic licence to call the character in this story by this name. The events of Palm Sunday are wonderfully symbolic and by weaving them into a personal story the some more symbolism can be touched. As always these are suggested notes not a script, feel free to modify.

Abijah finished his morning prayers and found himself thinking of the young donkey colt tied up outside the house – again. Every time he prayed recently he would end up thinking of this animal. He didn’t understand why, he even asked the rabbi but he didn’t understand either. It wasn’t the only animal Abijah kept. There was the lamb he would take to the temple soon, the older donkey, a goat and a few chickens too. The young donkey, was growing fast, he didn’t need a second donkey so he had planned sell it to some travelers on their way home after Passover but something felt wrong about that plan.

Through the window he could hear the crowds of people moving towards Mount of Olives and then Jerusalem. It was always crazy around Passover. Everyone who worshiped the one true God would need to visit the temple in Jerusalem. Abijah could also hear the animals outside, they were particularly noisy so he we went to check on them. As he approached two men walked towards the colt and started untying it’s rope.

Somehow they didn’t look like thief’s, they weren’t trying to hide what they were doing and didn’t run when he came outside.
“Why are you untying the donkey colt?” he asked calmly.
“The Lord needs it” came the equally calm response.
Abijah knew it was crazy but he didn’t stop them. Instead he decided to follow them and see what would happen.

The two men walked the colt over to a large crowd on the side of the road. It was a warm spring day and some of the men were carrying their cloaks. They threw the cloaks over the donkey and on climbed another man. Abijah watched amazed, this young donkey had never been ridden, it wasn’t trained, it wasn’t even fully grown. Abijah has never seen anything like this in his life, the donkey seemed perfectly happy to carry the man.

Who was this man on his donkey? He must be very special for the young animal to react like that. He didn’t look weak of frail or like he couldn’t walk, so why would he need a donkey to ride on?

As the crowd moved towards Mount of Olives Abijah heard his answer.
‘Look! It’s Jesus of Nazareth’ the crowd started to whisper and then shout.
‘Jesus the miracle worker’ came a loud scream.
‘Jesus the messiah’ another voice cried out.
The crowd was growing larger and larger and it was becoming harder for Abijah to see his donkey.

As the road dipped down the Mount of Olives the disciples of Jesus started to join in with the cries of the growing crowd. They praised God calling out; “Blessed is the king who comes in the name of the Lord!” and “Peace in heaven and glory in the highest!”

It was less than 15 minutes to the city now and from edge of Jerusalem people began turning back up the road to see who was coming. They ran towards the crowd laying their coats on the stony ground for the donkey to walk on and ripping huge palm branches from the trees to wave in celebration.

“Hosanna” came the cry, “Blessed is the king of Israel!” and “Blessed is he who comes in the name of the Lord!”
“Just like the scripture said, ‘your king is coming, seated on a donkey’s colt’” came a calmer voice besides Abijah
Abijah turned to see the face of his rabbi.
“Our king is coming riding on my donkey colt’ replied Abijah to the smiling face besides him.
“Your prayers!” came the wide eyed response
“Honsanna” the two men said in unison.

Today’s hero is Abijah’s donkey, he shows us the gift of a bigger story. 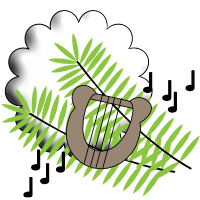