Saul’s story is huge and in this condensed lesson we have loads of themes that could be used for play activities, these games concentrate on the idea of a torn robe and a wilful king. Saul isn’t a bad character,simply put he tries to use his own logic rather than follow instructions, and when God ‘leaves’ him he knows his downfall is on the cards.

Peg tag – This traditional group game combines chase with the idea of taking part of someone’s clothing, a theme that ties nicely into Saul and the torn robes. Peg 3-5 spring loaded clothes pegs to the back of each child’s top. the aim is to get as many pegs as possible without losing your own. captured pegs can either be added to your own (sit first to show you can’t be caught) or dropped into your ‘teams’ bowl.

Directions – This is a classic classroom experiment that will only work with confident readers aka slightly older kids. Click on the picture for the pdf of the test with 20 instructions for them to follow. If they read the whole test they will realise that they only need to complete 2, but most kids will try and complete them all because they will start before finishing reading. Talk about how sometimes we think we know best, but often directions are given for a reason

Follow the leader – this is a classic and a great game for linking into how Saul wanted to go his own way rather than follow God’s instructions. Sometimes using a really familiar game allows the children to really customise it!

Pass the crown – For this game you’ll need a crown or a ring. For younger children you can play this like pass the parcel complete with music that will stop to allow the king to wear the crown and parade round the circle once, but for older children passing the crown can be the challenge. Use your hands, feet, elbows, head, roll it along the ground, throw it… keep going round the circle until it gets dropped and then start again. Link into God’ being in charge of who would wear the crown next not Saul!

Sneaking back – If you are lucky enough to have space for this classic game (often called 40/40) it ties in really nicely to Saul looking for David and David sneaking out of his hiding place. If it’s new to you then the game mixes Tag and Hide and seek. One player is chosen and starts at a designated ‘home base’. They can capture the other players by ‘spying’ them rather than by tagging. If a player can reach the home base unseen they are safe. The game ends when all players are safe or seen. 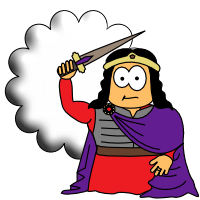 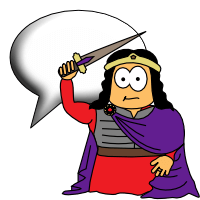 One response to “King Saul | Games”