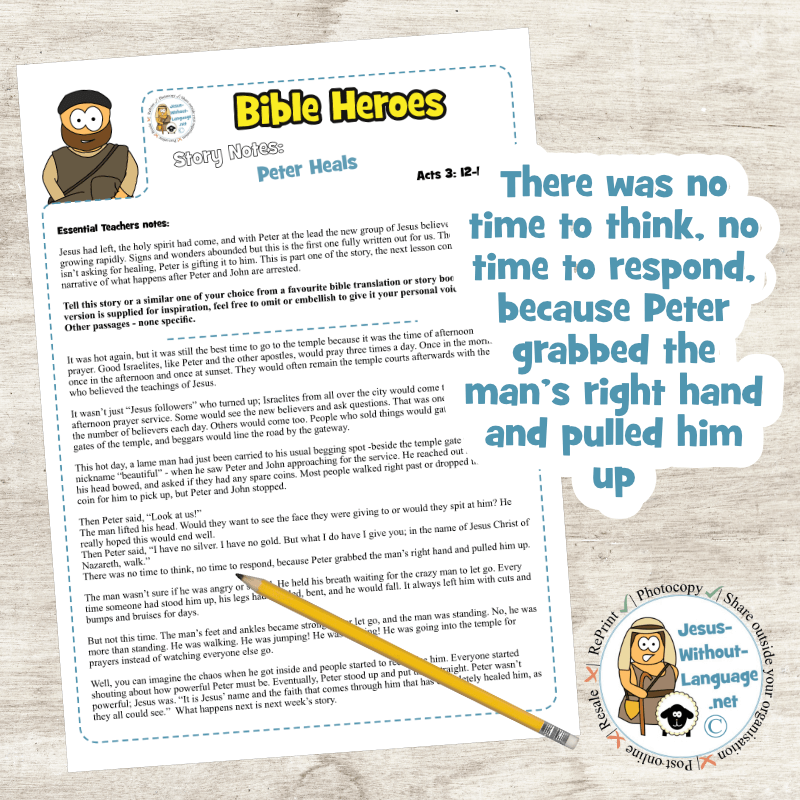 Essential Teachers notes:
Jesus had left, the holy spirit had come, and with Peter at the lead the new group of Jesus believers were growing rapidly. Signs and wonders abounded but this is the first one fully written out for us. The lame man isn’t asking for healing, Peter is gifting it to him. This is part one of the story, the next lesson completes the narrative of what happens after Peter and John are arrested.

It was hot again, but it was still the best time to go to the temple because it was the time of afternoon prayer.

Good Israelites, like Peter and the other apostles, would pray three times a day. Once in the morning, once in the afternoon and once at sunset. They would often remain the temple courts afterwards with the others who believed the teachings of Jesus.

It wasn’t just “Jesus followers” who turned up; Israelites from all over the city would come to the temple for the afternoon prayer service. Some would see the new believers and ask questions. That was one way God added to the number of believers each day. Others would come too. People who sold things would gather outside the gates of the temple, and beggars would line the road by the gateway.
This hot day, a lame man had just been carried to his usual begging spot -beside the temple gate with the nickname “beautiful” – when he saw Peter and John approaching for the service.

He reached out his hand, with his head bowed, and asked if they had any spare coins. Most people walked right past or dropped their smallest coin for him to pick up, but Peter and John stopped.

Then Peter said, “Look at us!”

The man lifted his head. Would they want to see the face they were giving to or would they spit at him? He really hoped this would end well.

Then Peter said, “I have no silver. I have no gold. But what I do have I give you; in the name of Jesus Christ of Nazareth, walk.”

There was no time to think, no time to respond, because Peter grabbed the man’s right hand and pulled him up.

The man wasn’t sure if he was angry or scared. He held his breath waiting for the crazy man to let go. Every time someone had stood him up, his legs had buckled, bent, and he would fall. It always left him with cuts and bumps and bruises for days.

But not this time. The man’s feet and ankles became strong. Peter let go, and the man was standing. No, he was more than standing. He was walking. He was jumping! He was dancing! He was going into the temple for prayers instead of watching everyone else go.

Well, you can imagine the chaos when he got inside and people started to recognise him. Everyone started shouting about how powerful Peter must be. Eventually, Peter stood up and put them straight. Peter wasn’t powerful; Jesus was. “It is Jesus’ name and the faith that comes through him that has completely healed him, as they all could see.”  What happens next is next week’s story.

Today’s bible hero is Peter because he shows us the gift of POWER. 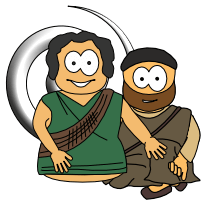 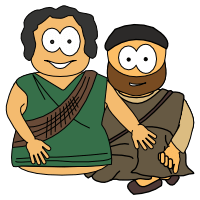 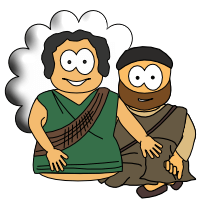