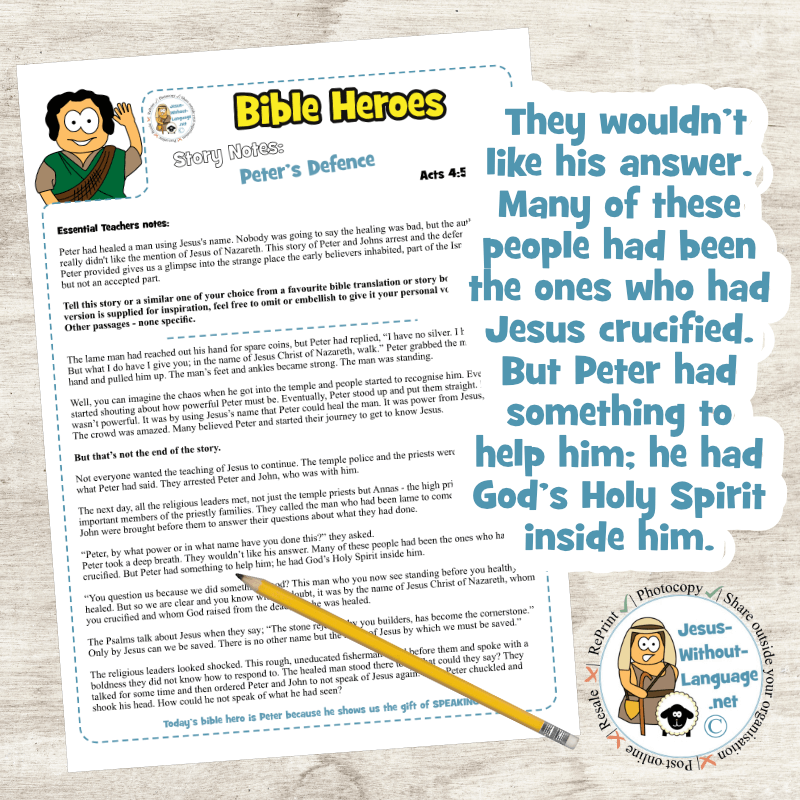 Essential Teachers notes:
Peter had healed a man using Jesus’s name. Nobody was going to say the healing was bad, but the authorities really didn’t like the mention of Jesus of Nazareth. This story of Peter and Johns arrest and the defence that Peter provided gives us a glimpse into the strange place the early believers inhabited, part of the Israelite nation but not an accepted part. This story uses the technique of repeating part of the last story as a recap before adding the next part.

The lame man had reached out his hand for spare coins, but Peter had replied, “I have no silver. I have no gold. But what I do have I give you; in the name of Jesus Christ of Nazareth, walk.” Peter grabbed the man’s right hand and pulled him up. The man’s feet and ankles became strong. The man was standing.

Well, you can imagine the chaos when he got into the temple and people started to recognise him. Everyone started shouting about how powerful Peter must be. Eventually, Peter stood up and put them straight. Peter wasn’t powerful. It was by using Jesus’s name that Peter could heal the man. It was power from Jesus, not Peter. The crowd was amazed. Many believed Peter and started their journey to get to know Jesus.

But that’s not the end of the story.

Not everyone wanted the teaching of Jesus to continue. The temple police and the priests were outraged to hear what Peter had said. They arrested Peter and John, who was with him.
The next day, all the religious leaders met, not just the temple priests but Annas – the high priest, – and the important members of the priestly families. They called the man who had been lame to come too. Peter and John were brought before them to answer their questions about what they had done.

“Peter, by what power or in what name have you done this?” they asked.
Peter took a deep breath. They wouldn’t like his answer. Many of these people had been the ones who had Jesus crucified. But Peter had something to help him; he had God’s Holy Spirit inside him.

“You question us because we did something good? This man who you now see standing before you healthy was healed. But so we are clear and you know with no doubt, it was by the name of Jesus Christ of Nazareth, whom you crucified and whom God raised from the dead, that he was healed.”

The Psalms talk about Jesus when they say; “The stone rejected by you builders, has become the cornerstone.”
Only by Jesus can we be saved. There is no other name but the name of Jesus by which we must be saved.”

The religious leaders looked shocked. This rough, uneducated fisherman stood before them and spoke with a boldness they did not know how to respond to. The healed man stood there too. What could they say? They talked for some time and then ordered Peter and John to not speak of Jesus again. Peter Peter chuckled and shook his head. How could he not speak of what he had seen? 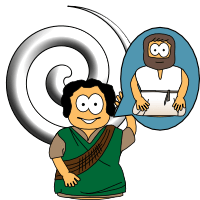 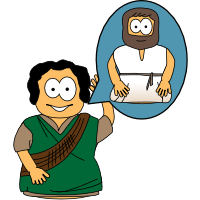 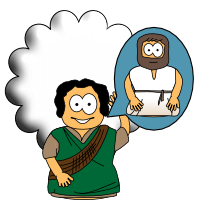