Samuel – the great judge and prophet (pretty quiet around now)

Jesse – David’s dad (we don’t know who mum was)

Saul – The present king, who’d messed up so God had left him

Armor-bearer – This is a title such as lord or knight, it was literally the one who carried the kings armour and was a great honour, though not an exclusive one.

King Saul is being afflicted by an evil spirit send by God. Samuel had left him, God had left him and the thought must have crossed him mind that his kingship may be taken from him too. Meanwhile the region is not actively at war but is far from stable, it’s pretty safe to assume his ‘court’ would have been rather unsettled right now. The calming power of music, an idea by what must have been a desperate attendant, is grasped upon swiftly and a hunt ensues. 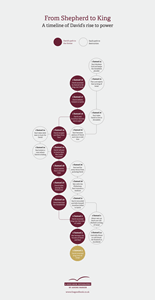 Enter David, a youngster not fully grown. Saul, who is supposed to be quite imposing, would tower over him. Filled with Gods spirit by a rush of wind at his anointing by Samuel, David is not only godly, but handsome, strong and brave, plus a good speaker – all kingly qualities, but also ones that make him memorable by the kings servants. Samuel had gone to Bethlehem with the rouse of sacrificing a cow, anointing David in the presence of his brothers. Apart from a few prominent townspeople, David’s destiny was not common knowledge. It’s clear Saul had no idea who it was he was inviting into his presence, because it’s pretty safe to assume Saul would have killed him.

Instead David is given a small glimpse at what is to come. A chance to witness how a king lives, rules, and is treated by his subjects. He’s here to work, his kingly qualities qualifying him as a perfect kings servant. For to him the notion of his kingship is merely a promise, not a title to be taken. Soon he’s sending letters home to Jesse, signed with the kings seal. David’s given an intimate position of Armour bearer, one that shows great trust and honour. Yet the irony can’t be lost, the most direct preparation for his kingship comes through the lowliest of reasons – while being the youngest and least important son sent to guard the sheep, he had taken his harp or lyre to pass the hours. David who sings to his lambs and serenades the hillsides is now playing those same tunes for the most powerful man in his world.

Then the passage ends, leaving us thinking that Saul had come to love David, to give him a permanent position… but that’s not the case. The next chapter starts and David is back to being a shepherd and when David fights the Goliath Saul is unsure of his identity. It’s a point of contention, some claim David would have been brought into a darkened tent with a confused king, too deluded to really comprehend the musician, others argue the early stories of David are by no means in chronological order. More simple arguments wonder if David had aged and would look different from a distance, perhaps Saul had grown tired of David’s songs of a God who had abandoned the king, perhaps the evil spirit had calmed and David was called upon less frequently of late. Whatever the reason Saul and David are not so close as chapter 16 alone may lead one to believe.

If you want to put David’s like in context there is a great info-graphic by the good book company. (Pictured in small here)