Essential Teachers notes:
The story of the first 4 disciples is pretty typical of Jesus’s style – call out, ask to follow & promise more. Nowhere is that clearer than in this first invitation.

Tell this story or a similar one of your choice from a favourite bible translation or story book. This version is supplied for inspiration, feel free to omit or embellish to give it your personal voice.
Main passage: Mark 1
Additional Passages: Matthew 4, Luke 5

Jesus was walking along the shore of the Sea of Galilee one day when he spotted some fishermen in their boats. Some were casting their nets out into the shallow waters; others were mending their nets, perhaps having already caught some fish, perhaps about to start.

As he got near the boat of Simon and Andrew, he called out, “Follow me and I will teach you to fish for people.” So they left everything to go with him. Further along were two brothers, James and John; Jesus called out the same words and they too left their boats behind.

What’s going on here? A single sentence and 4 men leave everything behind to follow a stranger? Really? Perhaps there is something more to this story. Lets go backwards.

Children in Jesus’ time would study scripture, memorising long passages from a rabbi at the synagogue. Only the best, not only in remembering but also in how they acted, would be sent to the school when they were older. Sometimes rabbis would come to the schools. The rabbis would call the best students to ‘follow them’. It was a great honour to be called. Following a rabbi didn’t just mean travelling with them. It meant studying everything about the rabbi. Learning how he understood the scriptures, how he lived everyday, even how he tied his sandals. The students’ job was to become like the rabbi so they could one day become a rabbi too.

Back to the beach and the boats and the men. This isn’t the first time Andrew had seen Jesus. Andrew had been a follower of John the Baptist and had seen when Jesus was baptised. He’d heard the word of God from Heaven as Jesus came out the water that day. If Andrew knew, then all the fishermen along the banks of the Galilee knew. Whoever this Jesus was, he was special.

So when someone spots Jesus walking along the shore, the whispers start. “Isn’t that Jesus from Nazareth that John baptised?” They whisper.

“John the Baptist has been arrested. Perhaps he’ll continue his work.”
“Or do something even bigger.”
“What can be bigger than baptising hundreds?”
“I’d love to find out!”

So, when Jesus chose 4 fishermen and said ‘follow me’. WOW! It was like getting picked for the best team ever. They had probably dreamed of a day they might hear a rabbi say those words to them, but fishing out in the boats they didn’t have a chance, or did they? Jesus calls, and the men run. They got picked! They got chosen! Chosen not to gather fish but to gather people. To us it’s just a few words, but they knew deep down what those words meant. 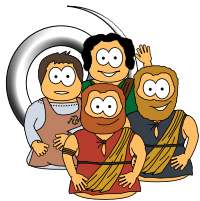 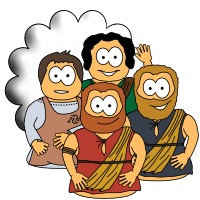 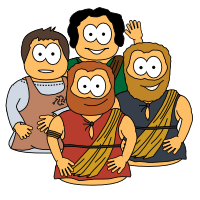