Preparing to Teach : The Apostles

Peter (Simon) – Probably the most vocal, impulsive, emotional and well known disciples, Simon is renamed Peter (the rock) by Jesus and goes onto be the sort of leader of the pack.

James & John – These brothers are called the sons of thunder by Jesus, over excitable and fiery they form the inner circle with Peter and seem glued to Jesus’s side.

Andrew – Leaving John the Baptist, Andrew seeks greater truth in Jesus, while brother to Simon-Peter, Andrew is much less impulsive and outspoken than his fellow Galilean fishermen.

Philip – Is clearly a seeker and will pull people into the discussion, inviting Nathaniel into the crowd. Not to be confused with Philip the deacon who met the eunuch.

Thomas – Is a man of declarations, be they boldly supportive, deeply theological, or famously doubtful, he’s the first to grasp that Jesus is fully God.

Nathaniel – Is a devout Israelite, a true Jew whose faith is very much alive and makes him able to see Jesus for who is really is, the messiah, right from the beginning.

Matthew – Longs to be accepted and loved, something he would never get being a tax collector, he sees an opportunity in Jesus’ invitation and doesn’t hesitate to leave it all behind.

Little James – James the less or the little is probably the most obscure of all the disciples, but Jesus did not always choose the dramatic and some stories are untold.

Simon – Another man of strong convictions, a Zealot defending tradition and Jewishness, to be in a crowd with the tax collector Matthew shows how Jesus would include all in his kingdom.

Jude – Sometimes called Judas or Thaddeus, he wasn’t very outspoken but may have shared some of Simons strong beliefs. Some people believe he wrote the epistle Jude.

Judas – The money keeper and betrayer, it’s the 30 pieces of silver and kiss Judas will always be remembered for, the only disciple not to see Jesus resurrected.

These 12 brash, uncouth, foolish, brave, but importantly ordinary men were chosen by Jesus himself as his top team. The number 12 was hugely significant, signalling completeness in scriptures. The 12 tribes of Israel represented the whole of God’s chosen people, and so for Jesus to chose only 12 of his crowd was to symbolically show he was there for the whole of the Jewish nation. In acts Judas is replaced with Matthias to continue this idea. 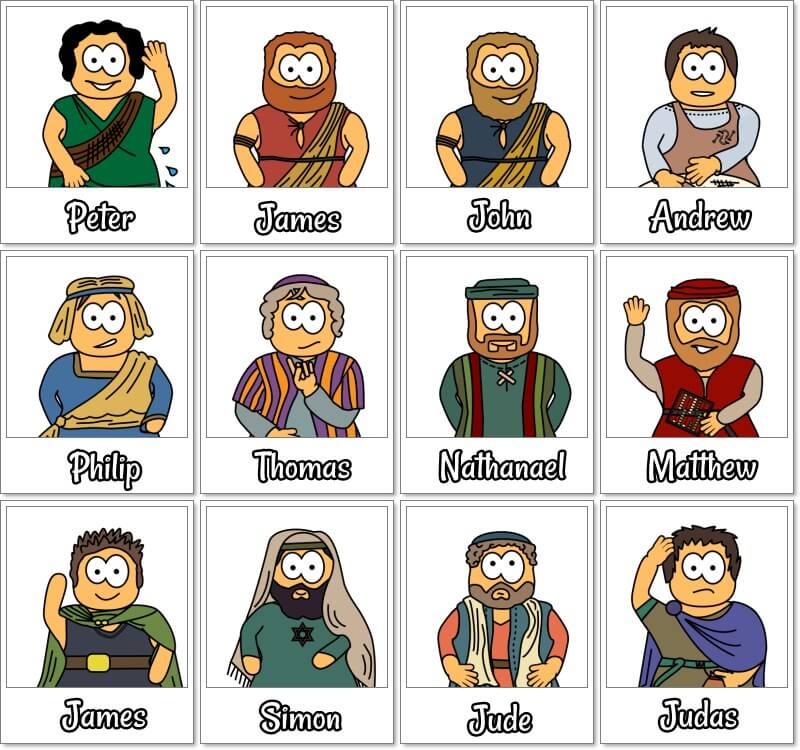 Unlike some other biblical heroes, the Apostles stories are usually a bi-product, a means to illustrating a greater lesson, and for some their presence in the list is the greatest fact we can verify about them. For evangelicals the titbits of information can’t be bumped out with church tradition, though whatever your perspective on the validity of the non-biblical accounts it’s usually worth taking a look at.

These 12 men were chosen, there were no volunteers and their status as chosen lead to persecution for many. They accepted a role with no security, no pay, and often involving abandoning family. While the risks were great, and the sacrifice total, in return these 12 had an intensive discipleship course, at times having hidden meaning revealed to them while the rest of the crowd were left to ponder. As well as being sent out as part of the 70, and commissioned by the resurrected Christ, they were witness to countless miracles and the arrival of Pentecost. Many were martyred and some went on to write scripture.

Taking a closer look at the list reveals that they were neither all Galilean, nor all fishermen as they are often portrayed. Rather than gormless teens looking for something to do, most had careers they abandoned and were actively searching for a deeper truth. Many came to Jesus with a strong faith and firm opinions. The world they lived in was in turmoil, the religious groups torn between appeasing the empire that detested their religion, and fighting against it. Some were part of these groups, some on opposite sides. While elements of the Roman world shaped the early church, they met Jesus as an oppressed people dreaming of a ‘Messiah’, a great warrior who would rescue his people from it’s clutches. Jesus turned their dreams on their heads and seemed to spend significant time confusing their preconceived ideas.

8 responses to “Preparing to Teach : The Apostles”