Today’s hero is Tabitha / Dorcas because she shows us the gift of Influence.

Essential Teachers notes:
Tabitha is a dangerous lesson, it’s a dangerous lesson not only because it suggests the awesome amount of power God bestows upon his followers, the influence a simple working woman who held a non-ministry position can have, or the way a single event can transform a community… but it suggests that we too can do the miraculous. Death is a dark subject to talk to youngsters about, it’s the end of a chapter and it’s a painful reminder to us all of loss. Suggesting that resurrection is something within our grasp could lead to some awkward discussions about why God allows the things we love to die. While this may be painful it can also be a powerful tool for teaching youngsters that God is able to step into even the most hopeless situation.

—————————————-
Today’s story is lovely, and it’s sad, and it’s happy, and it’s wonderful… I wonder, do you have moments that are all those things, lovely moments, sad moments, happy moments and wonderful moments?

Because she was talented and made beautiful clothes… nope. Her clothes were beautiful but that’s not the reason.
They loved her because she was kind. the bible tells us that Tabitha was always doing good and helping the poor.
Tabitha loved Jesus and though she’d never met him she knew that Jesus would want her to be kind, so she was! Isn’t that lovely!

But then something really sad happened. Tabitha got sick. Tabitha died. Her friends came to her house and cried. Tabitha’s body lay on the bed waiting to be buried. Tabitha wouldn’t have the chance to be kind again. Tabitha was on her way to heaven to meet Jesus. Everyone was really sad.

Nearby the apostle Peter, one of Jesus’ friends who used to travel with Jesus was telling people all about his travels when some people rushed into the room and asked him to come see Tabitha. Why do you think they had come?
Perhaps when they left the house Tabitha hadn’t died and they hoped Peter would heal her?
Perhaps they wanted Peter to pray with Tabitha’s friends? We don’t know.
But it was important to them that Peter came to see Tabitha, so Peter did.

When Peter got there he went into the room with Tabitha’s body and all her friends crying. They wanted to show Peter the beautiful clothes Tabitha had made but Peter wanted to pray so he sent them all outside.

Tabitha opened her eyes and looked straight back at Peter’s face. She knew just who he was and sat up on the bed. Peter put his hands out towards her and she grabbed them to help her stand up. Tabitha was alive. Jesus had used Peter to bring Tabitha back from the dead. Everything sad had turned to happy, to amazing, to wonderful.

Peter led Tabitha outside to her friends. They started to celebrate the miracle of what had happened. But the celebration didn’t stop there. Because everyone in Joppa knew Tabitha, the kind lady who made beautiful clothes, everyone joined in the celebration. Then everyone asked about this Peter and the Jesus he and Tabitha followed. Soon the church in Joppa was huge.

Tabitha didn’t work for a church, she didn’t run any big event or write a book or preach a sermon or have a powerful position, she was just kind to everyone. But because of Tabitha lots and lots of people got to know about Jesus.

Today’s hero is Tabitha / Dorcas because she shows us the gift of Influence.

Other posts for Tabitha. 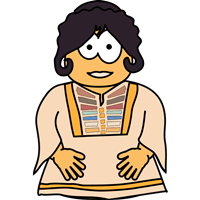