For centuries Thomas has been synonymous with doubting, within this lesson we look at both the doubter and the declarations he makes showing his deep, if sometimes over enthusiastic, faith. These games play on those 2 ideas of questioning and making statements.

Feel bags– In a story where the real action is all to do with touch feel bags are a great activity to lead into a discussion of how we use our senses to prove / verify what is real. Fill some small non-transparent bags with various objects and have the kids identify the contents through touch alone. 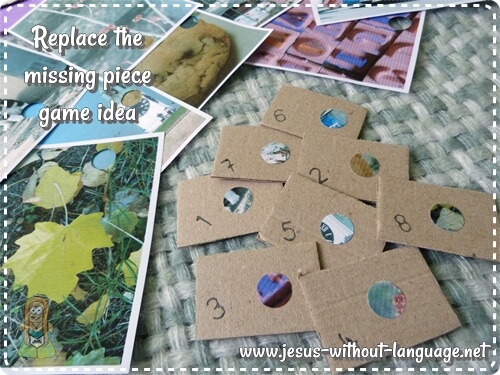 Replace the missing piece – Print some photo images. Remove one or more small sections from each image and stick it onto a piece of card. Write a letter on the cards with sections and number each large image. The object of the game is to match the letters and numbers. if you want to give your children a reason to move stick these around the room and make it a timed activity, this will encourage movement. Featured originally in the attributes of God lesson. (pictured)

Declare– Write the words true and false and stick them to a desk or wall. When the adult reads out the statements below have the children put their hand on the desk or wall to show they think it’s true or false. End with a discussion about how we decide which statements to believe.
1. A group of owls is called a ‘parliament’ – True
2. The leaves on a potato plant are poisonous – True
3. In space you cannot cry – True no gravity
4. Women can read smaller print than men – False men are actually a bit better
5. Women can hear better than men – True
6. A duck’s quack doesn’t echo – True
7. A pregnant goldfish is called a twit – True
8. The inventor of the light bulb, Thomas Edison, was afraid of the dark – True
9. The words “Poor” and “poverty” are written over 400 times in the Bible – True
10. Snow White was Walt Disney’s favourite animated heroine – False he liked Cinderella.

Convincing Thomas – This is a really simple group game, similar to the post-it note game, where you need to describe a mystery person. Start by choosing someone to be Thomas and send them out of the room for one moment. Then choose a familiar person to describe. When Thomas returns say that you were visited by someone but you’ve forgotten their name. Obviously you can’t use the persons name to describe them but you can use other details. Adapt the game to the ages of your child by describing by only answering questions, or through mime, or by limiting the number of words each person can say.

Tap whispers – Just like playing Chinese whispers, sit the children in a circle. have the children stretch out their left hands palm down and tap lightly on their neighbours hand with their right hands. Tap a light rhythm and pass it round the circle. Children may want to close your eyes to help them concentrate, if you can have the left hand palm up. Repeat allowing the children to choose the pattern. Talk about how sensitive our hands are and how we use touch to communicate and reassure.

Other posts for Thomas. 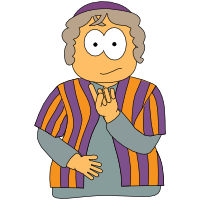