The story of the stubborn Pharaoh and the escape fro Egypt is a frequent favourite because of the vivid imagery. These games both use the ideas of many plagues, the stubbornness of the king and the characters of Moses and Aaron to compliment the story. 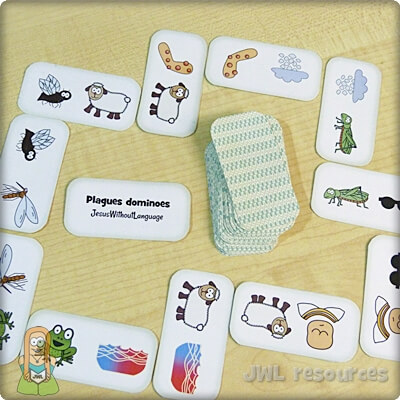 Plagues dominoes – these dominoes are a great review tool and suitable for the younger age group. Challenge the older ones to put the plagues in order first as a review of the different symbols. The download and full instructions can be found by clicking on the image.

Dodge the plague – This is basically dodge ball where each coloured ball (or cuddly toys if you can source them) represents a plague. Have 2 people play Moses and Aaron, God’s messengers ‘sending’ the plagues and the rest of the people can be the Egyptians. Talk about how the Egyptians may have felt about Pharaoh by the end.

Door frames – this is a simple competition to decorate a door frame swiftly… scope out the available door frames in advance and dependent on the surface you could use chalk, whiteboard markers, stickers or decorations with sticky tack to adorn the frame. talk about how the door markings were important to protect God’s people – but that they were done in a rush.

He said ‘No’ – Have the youngsters write a small challenge on a piece of paper then throw it into a tub, or prepare some age appropriate ones yourself. Talk about how the pharaoh had a choice but kept saying no – but God didn’t let him say no forever. then have a volunteer pick out a challenge and ask them if they would do it or say ‘no’ to doing it. If they say no give then a chance to pick another but this time they can’t say no!

The Staff – God uses both Aaron’s and Moses’ staff to begin some of the plagues – this activity builds on the transformational nature of these staffs. Lay a pole or staff on the floor and a marker about a meter beyond. Explain that once the child passes the staff they must pretend they are affected by on of the plagues. Have the children step or jump over the staff then go round the marker and return to the beginning. Use the cards that come with the story post as prompts if needed.

Blood – wade through yukky!
Frogs – frog jump
Gnats – swat away
Flies – make your hands flies
Livestock – walk on all fours
Boils – itch and scratch
Hail – run and cover your head
Locus – jump over the locus
Darkness – cover your eyes (get others to shout directions)
Death – do not include!

One response to “Pharaoh (Exodus 7) | Games”